I am a Principal Economist in the Monetary and Financial Market Analysis section in the Division of Monetary Affairs at the Federal Reserve Board of Governors in Washington D.C. .

My fields of interest include production-based asset pricing, monetary economics, and the interaction of policy with financial markets. .

The views expressed at this page are my own and do not indicate concurrence by other members of the research staff or the Board of Governors of the Federal Reserve System. 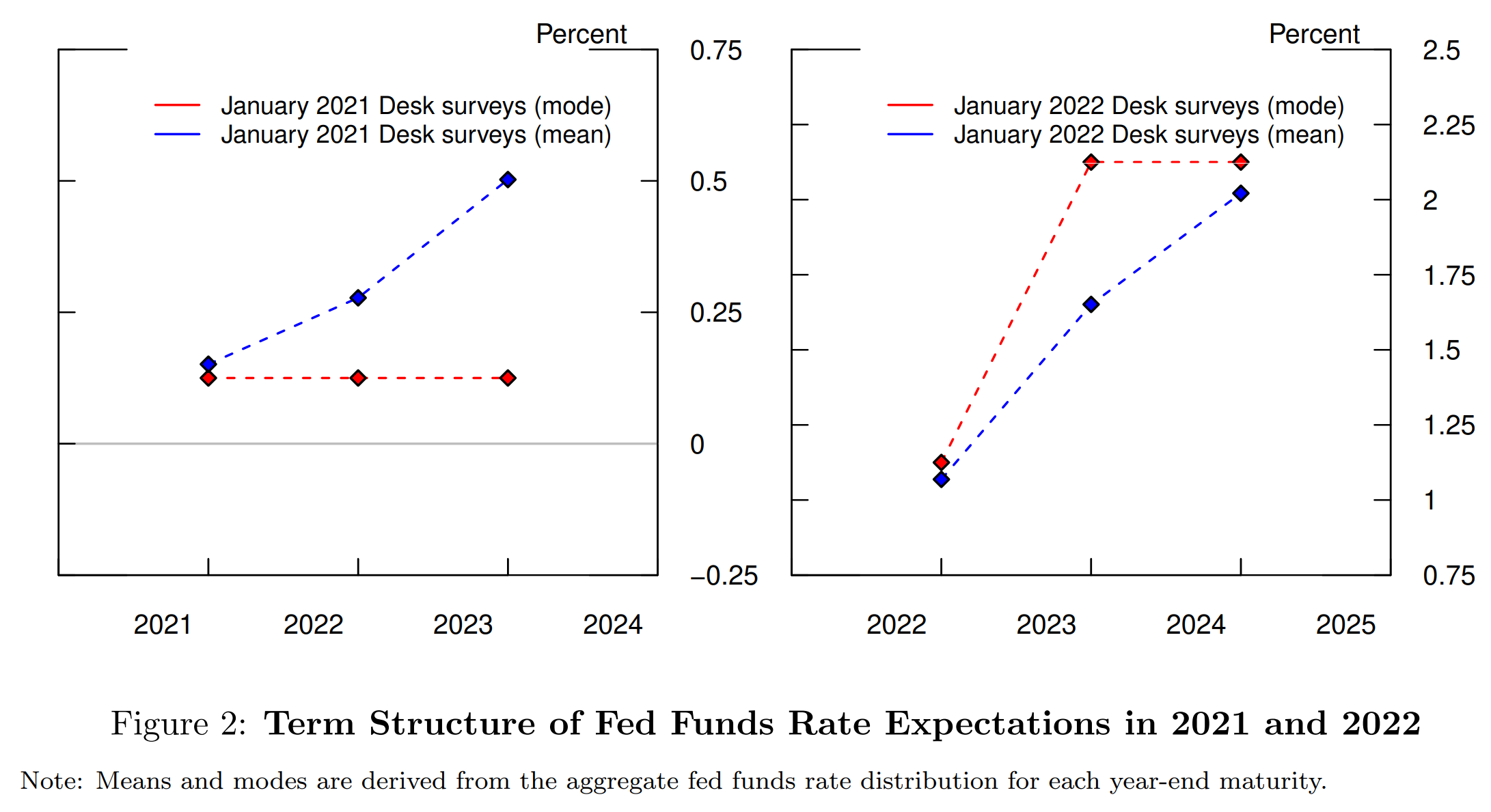 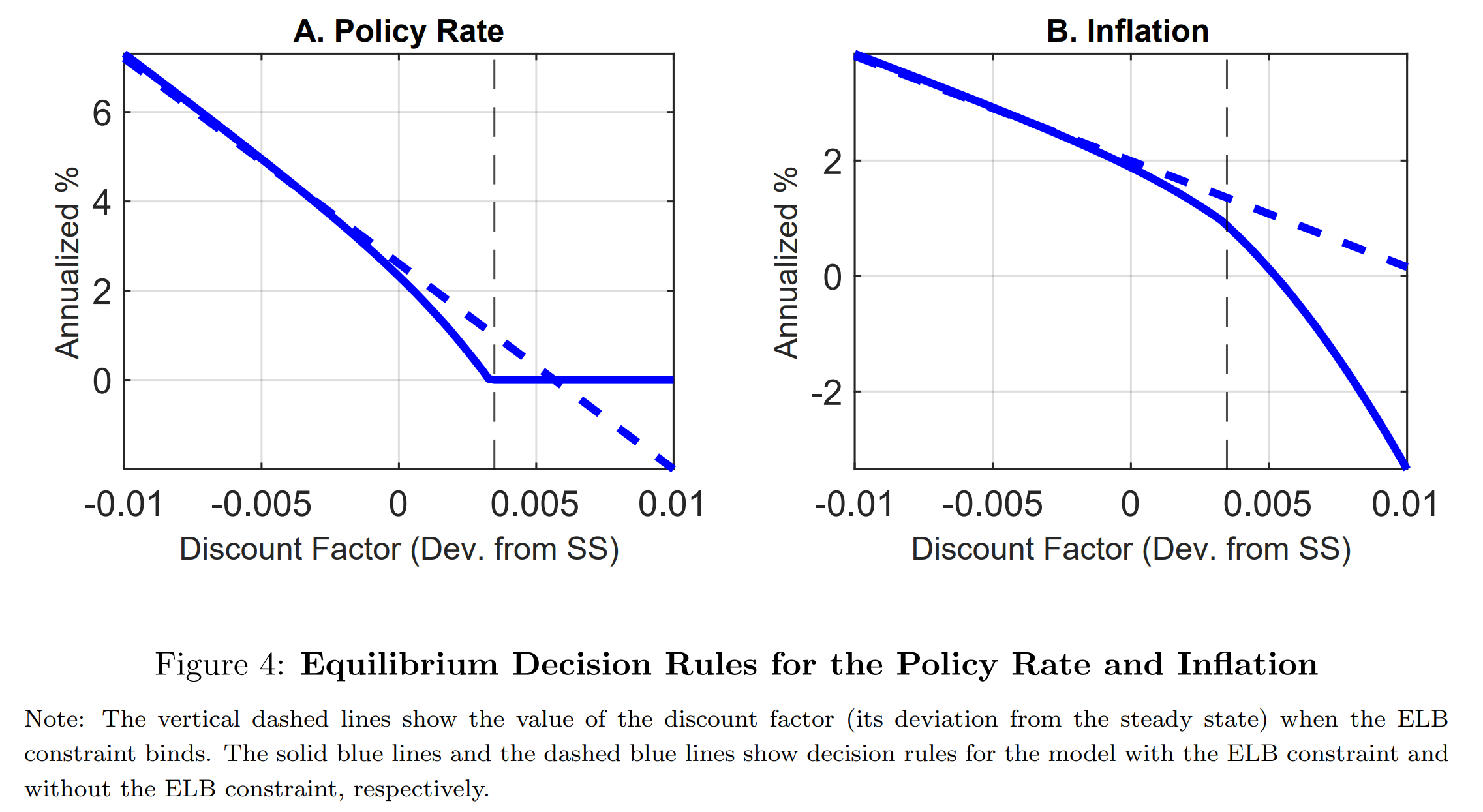 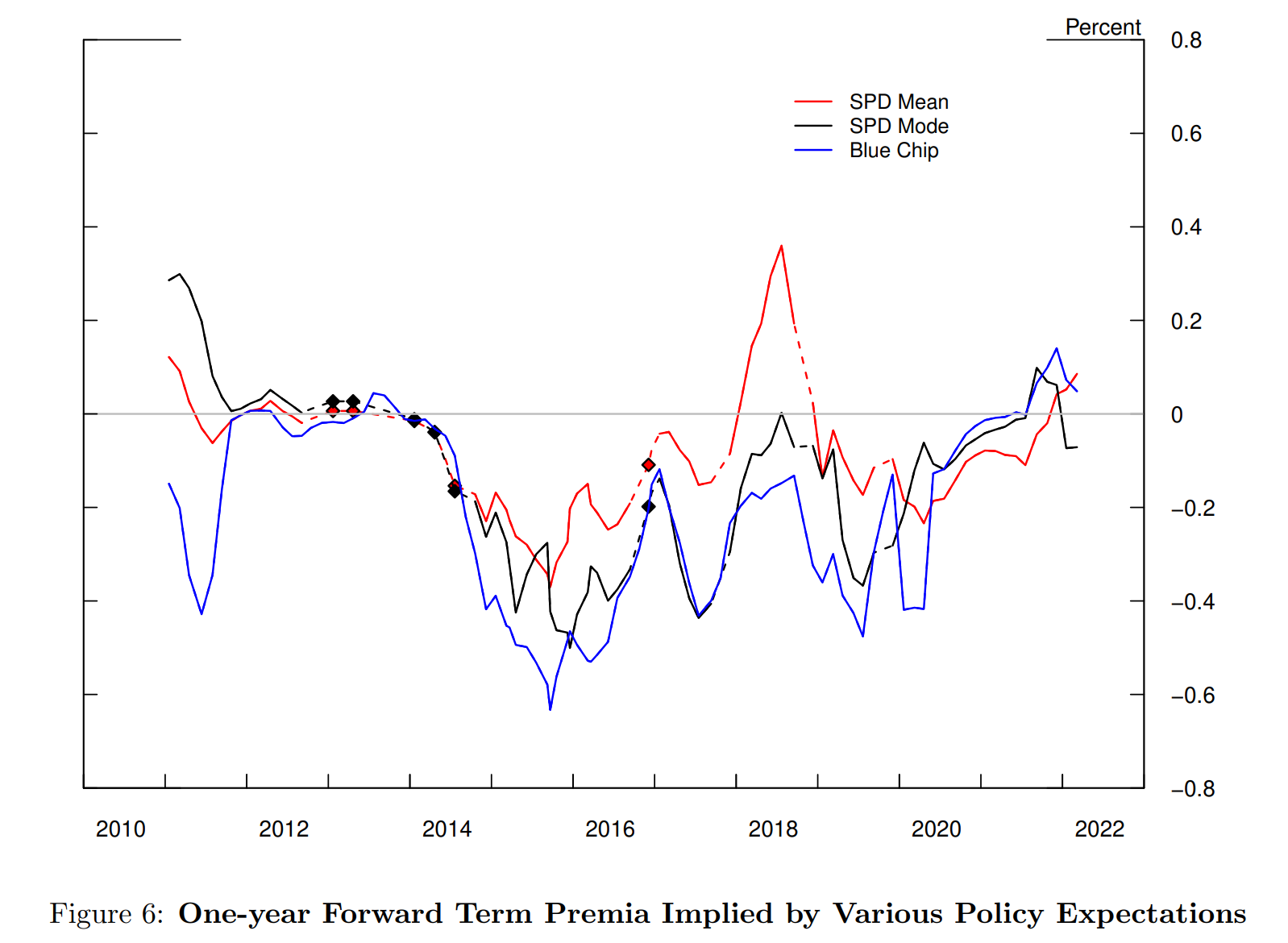 Abstract: We document some novel empirical evidence of significant time-varying skewness in the aggregate forecast distribution of the federal funds rate (FFR), i.e. asymmetric monetary policy expectations. To this end, we construct measures of the one-year ahead FFR expectations from responses to the Survey of Primary Dealers (SPD). The SPD provides a "physical” future distribution of the FFR, in contrast to measures extracted from asset prices. Importantly, this survey's unique feature allows us to explicitly compute mean and modal expectations and the discrepancy between the two measures, free of risk premia. We further show that a simple New-Keynesian model with the effective lower bound constraint can endogenously generate both positive and negative skewness similar to patterns in the data. The time-variation of asymmetry in the aggregate distribution highlights the importance of correctly measuring the mean when extracting FFR expectations from surveys. We argue that the FFR forecasts from the Blue Chip Survey (BCS), a popular survey measure of monetary policy expectations, track the mode more closely than the mean since 2011, when the data became publicly available. As a result, the mean measure of policy expectations extracted from the SPD implies significantly less negative term premia on average, compared to term premia implied by BCS forecasts. The mean measure also outperforms the BCS forecasts based on the mean squared error loss, consistent with the theory of optimal forecasting. 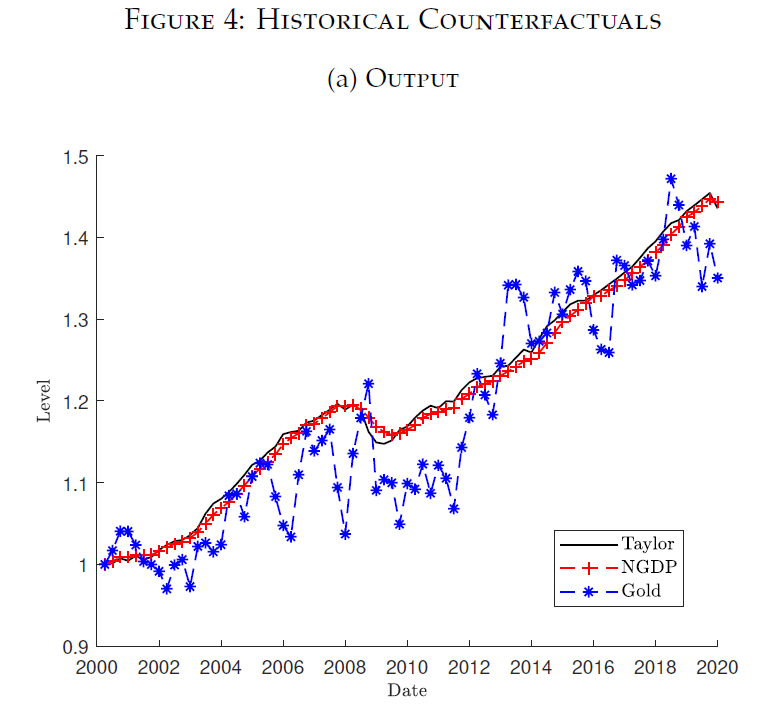 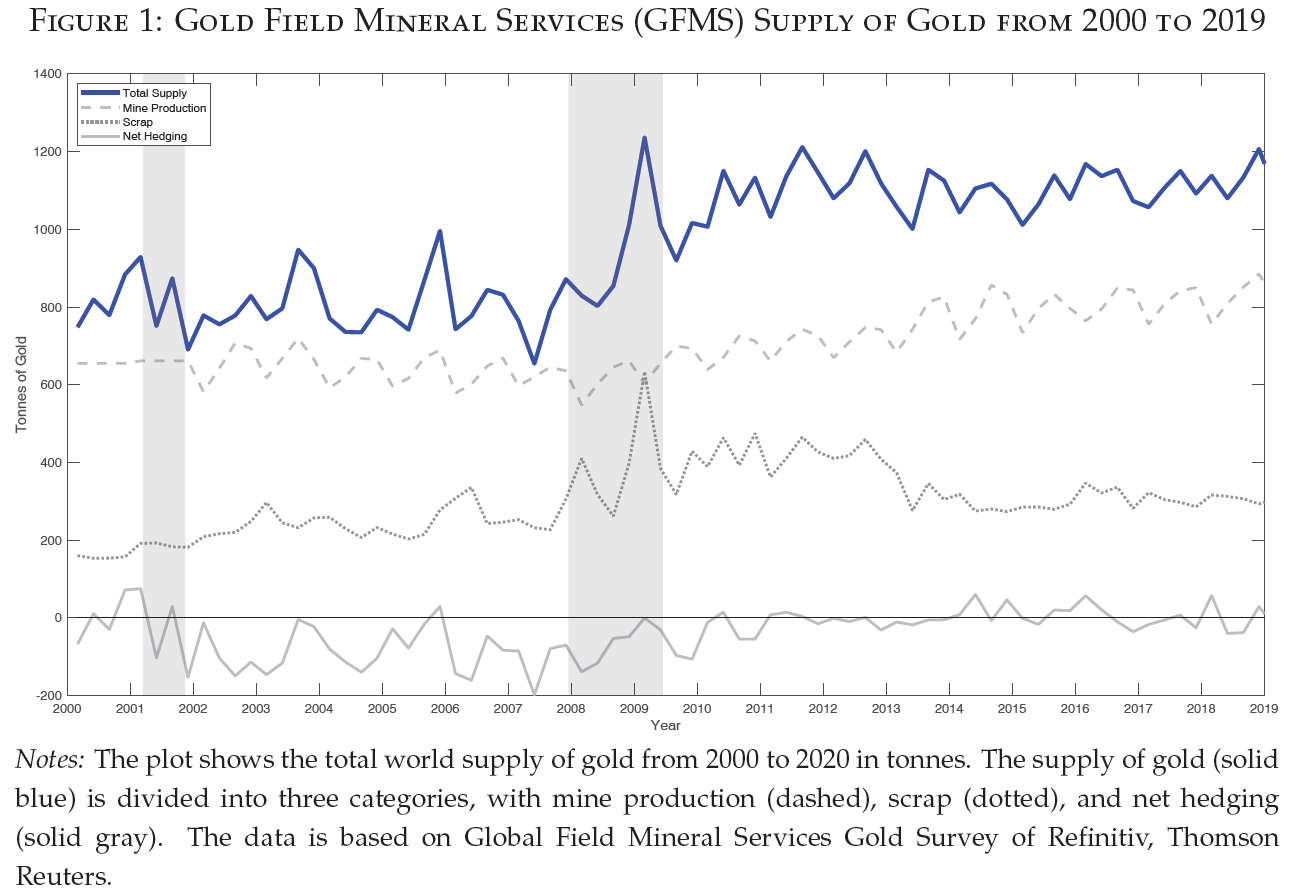 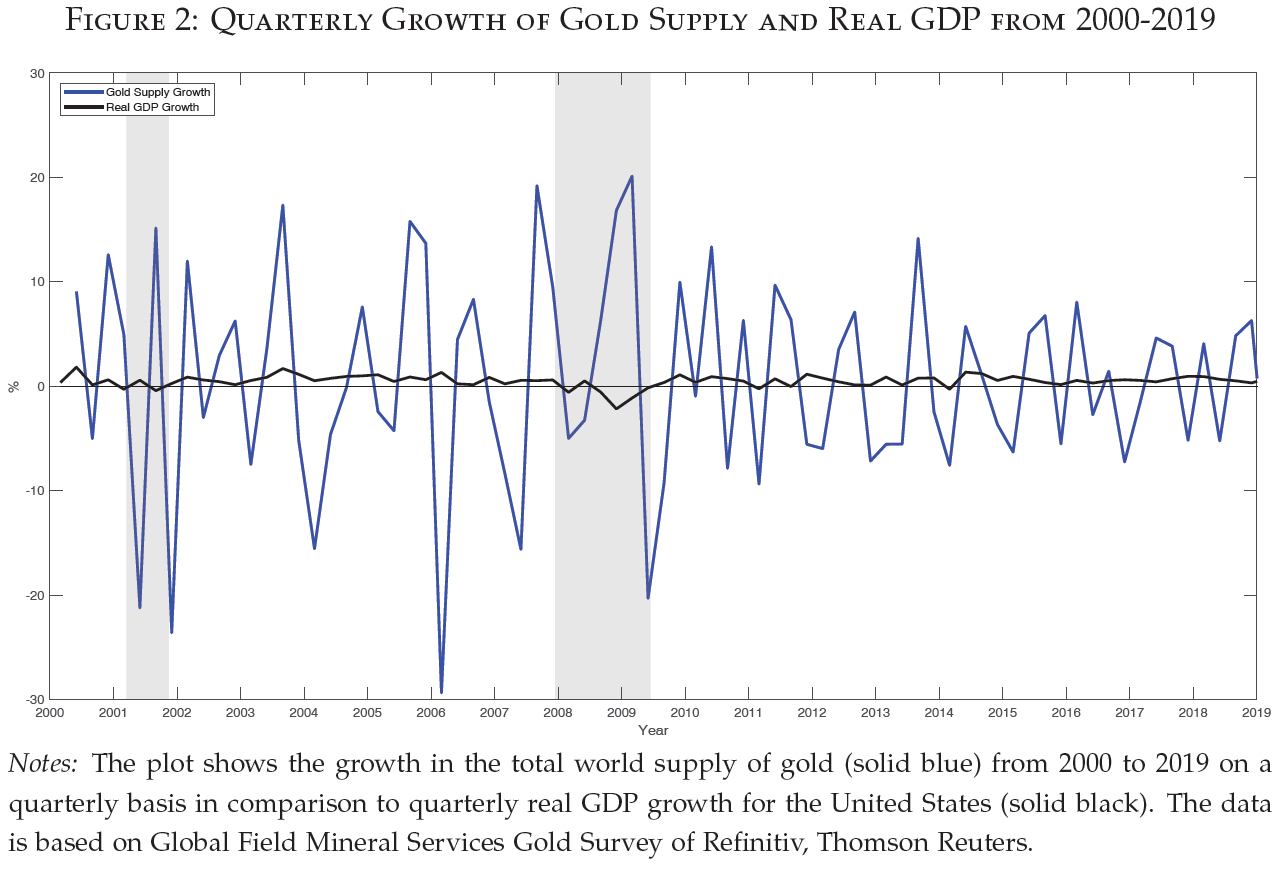 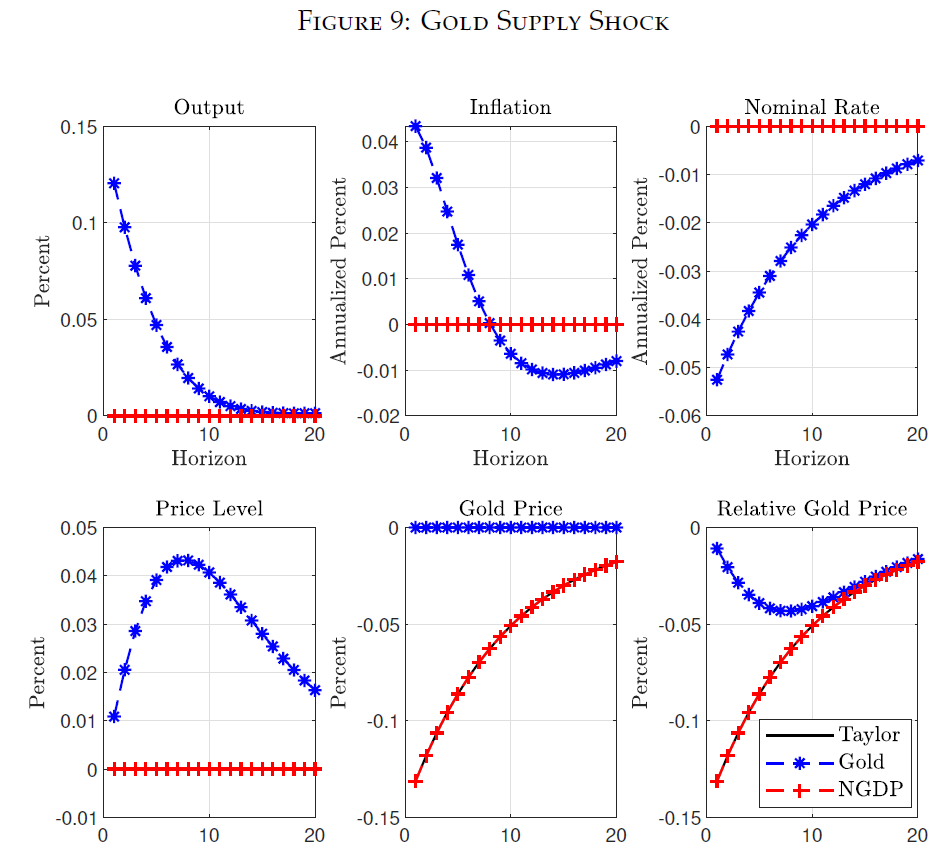 With J. Rawls and E. Sims

Abstract: This paper is one of the first to study the present-day properties of the gold standard in a quantitative model commonly used in central banks. We incorporate gold into an otherwise standard estimated New Keynesian model and compare the positive and normative implications of adopting a gold standard to other more commonly advocated policies. We show that under certain conditions, the gold standard is akin to a nominal GDP targeting framework and can at times be considered an improvement. However, unlike more conventional policies, the gold standard must react to shocks to the supply and demand for gold. We estimate the model for the post-2000 period using a novel dataset on the supply of gold and find that following a gold standard would result in dramatic increases in the volatilities of macroeconomic aggregates and a significant deterioration in household welfare. This is because the estimated shocks to gold supply and demand are significantly larger than for other more conventional aggregate shocks. In the end, what buries the gold standard turns out to be instability in the dynamics of gold itself. 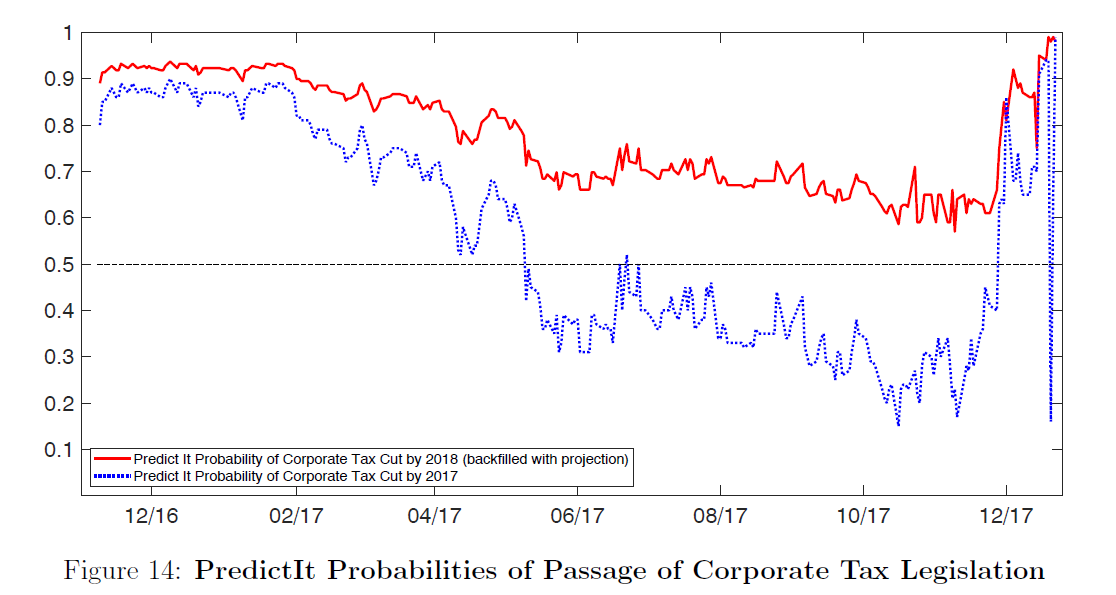 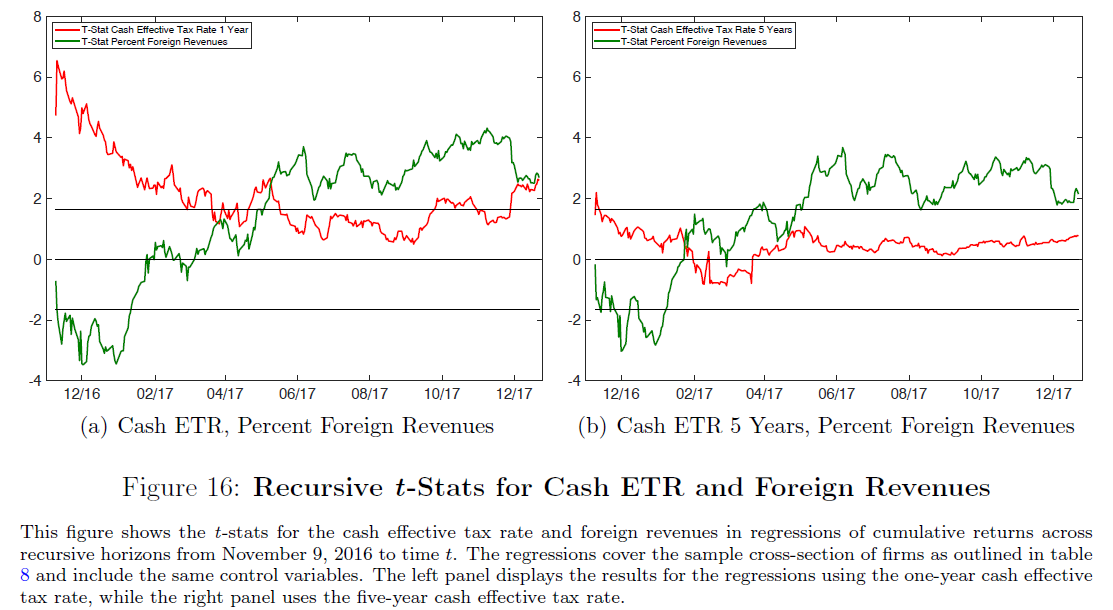 With D. Soques and W. Waller

Abstract: Conventional wisdom suggests that the promise of tax legislation played an important and positive role in the 25% increase in the stock market that began on November 9, 2016 and continued through December 22, 2017 (the day TCJA was signed into law). Our comprehensive and exhaustive analysis confirms its positive effect. With that said, we find that its net impact is relatively modest. To come to this conclusion, we first construct a novel daily human-based attribution by carefully reading the news on each of the 283 days. This exercise shows the 52 days in which tax-related news was important make up less than 1% of the total observed return. We attribute large gains to tax-related news immediately after the election as well as the build-up to passage in late 2017. However, key events in the summer of 2017 decreased the prospects for tax legislation, which wiped out most of the gains that we attributed to tax policy over the full sample. This "up, down, and up again" narrative is corroborated across a wide-range of alternative approaches, including (1) a machine-driven textual analysis based on over 1,500 possible specifications, (2) a novel probability measure tied to the passage of tax legislation constructed from prediction markets, (3) the relative performance of high tax firms compared to low tax firms, (4) a daily attribution based on firm-level regressions, and (5) several macroeconomic financial indicators. The relatively modest estimated effects are consistent with the market potentially being more driven by strong global growth, changes in other policies, a weaker dollar (which coincided with a reduction in the likelihood of passage of tax legislation), and numerous below-expectations inflation prints (keeping monetary policy at bay) that fortuitously occurred over this time period.

Abstract: We propose a production-based general equilibrium model to study the link between timing of cash flows and expected returns, both in the cross-section of stocks and along the aggregate equity term structure. Our model incorporates long-run growth news with time-varying volatility and slow learning about the exposure that firms have with respect to these shocks. Our framework provides a unified explanation of the stylized features of the slope of the term structure of equity returns, its variations over the business cycle, and the negative relationship between cash-flow duration and expected returns in the cross-section of book-to-market-sorted portfolios. 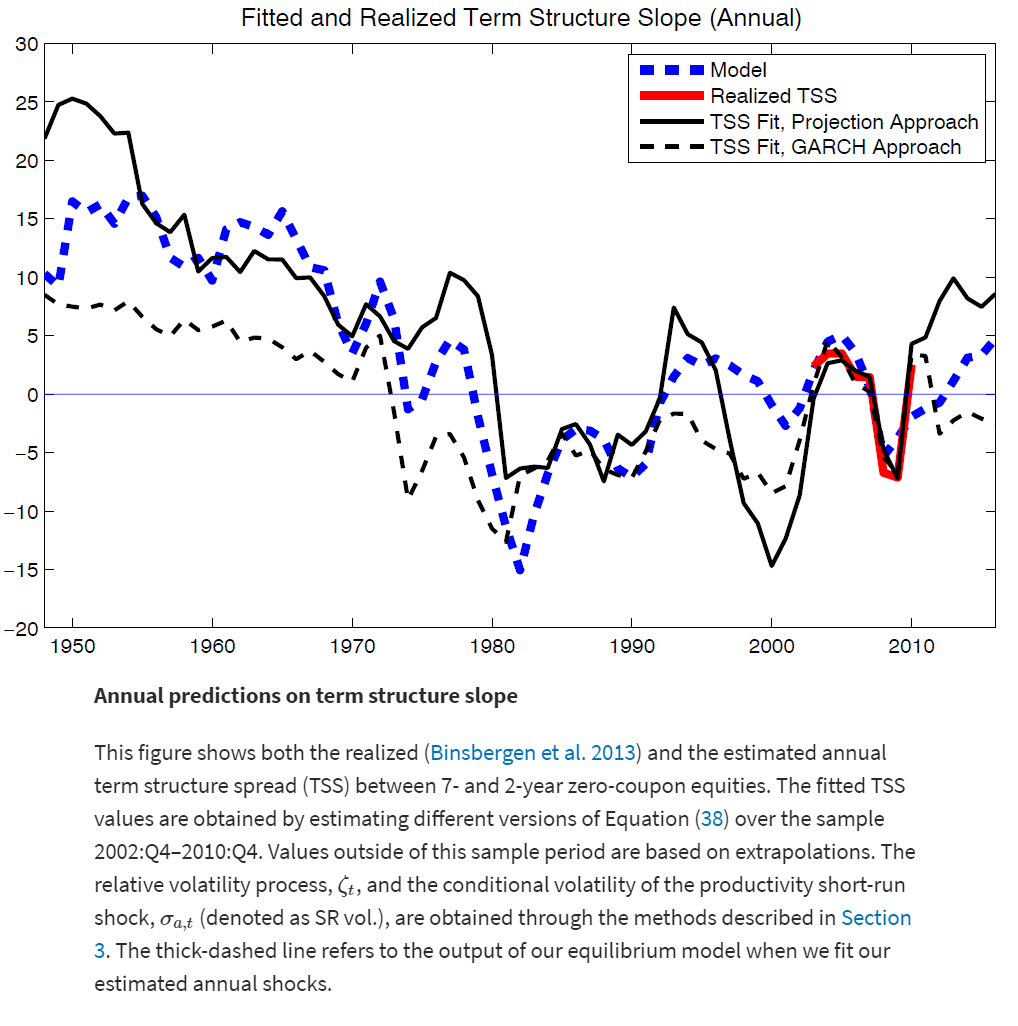 Abstract: The key insight from this analysis is that monetary policy should be responding more to negative shocks than positive shocks: optimal monetary policy is asymmetric. Moreover, if we take the stance that asset prices indicate a high cost of exposure to long-run risk and model this long-run risk carefully, this has very interesting implications for monetary policy that ripple through a surprisingly broad set of dimensions. There is an intuitive result that a Ramsey planner might wish to attenuate long-run risks. Less intuitively, I show that a Ramsey policymaker will induce a tolerance for skewness and a higher average inﬂation rate than is typically advocated in the literature. A variety of factors contribute to these results. First, deep non-linearities in the model entail that the policymaker behaves asymmetrically in its countercyclical policies. Second, the presence of capital generates longer-run eﬀects (hysteresis) and additional tradeoﬀs, which implies that “countercyclical” in this model takes on a lower frequency theme. And third, imperfect competition leads to the pursuit of a higher average inﬂation rate to oﬀset the related welfare costs. 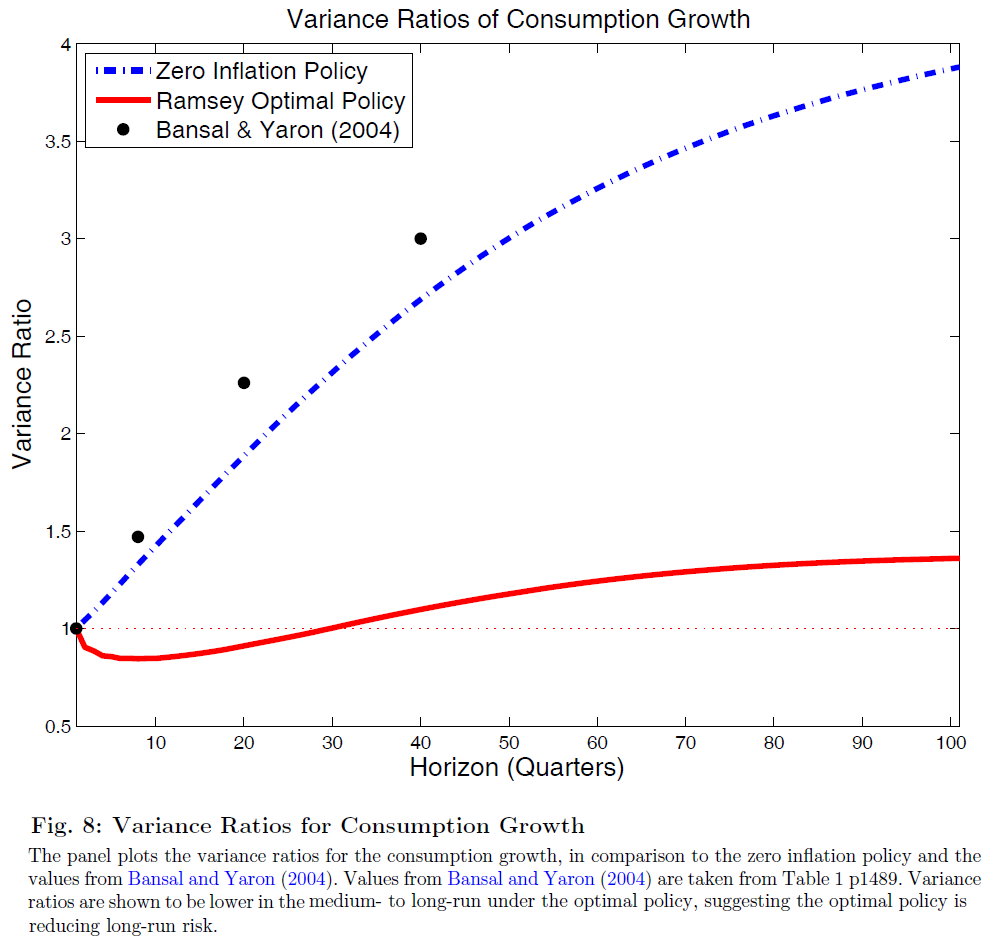 Taxes and the Fed:
Theory and Evidence from Equities

Abstract: Conventional wisdom suggests tax cuts are associated with higher stock market returns. We provide a critical theoretical and empirical analysis that suggests a key driver of fiscal effects on equity markets is the Federal Reserve through the risk premium channel. For the Post-1980 era, tax cuts lead to higher cash flow news and higher discount rates. The discount rate news (primarily risk premia) tends to dominate such that tax cuts are associated with lower equity returns. For the Pre-1980 era, the results flip. This empirical instability is confirmed across multiple measures of tax shocks at different frequencies. We show that these responses are consistent with a standard New Keynesian model that exhibits a shift in the aggressiveness of monetary policy. Moreover, these effects generate a large risk premium response to tax cuts consistent with the presence of a financial accelerator. 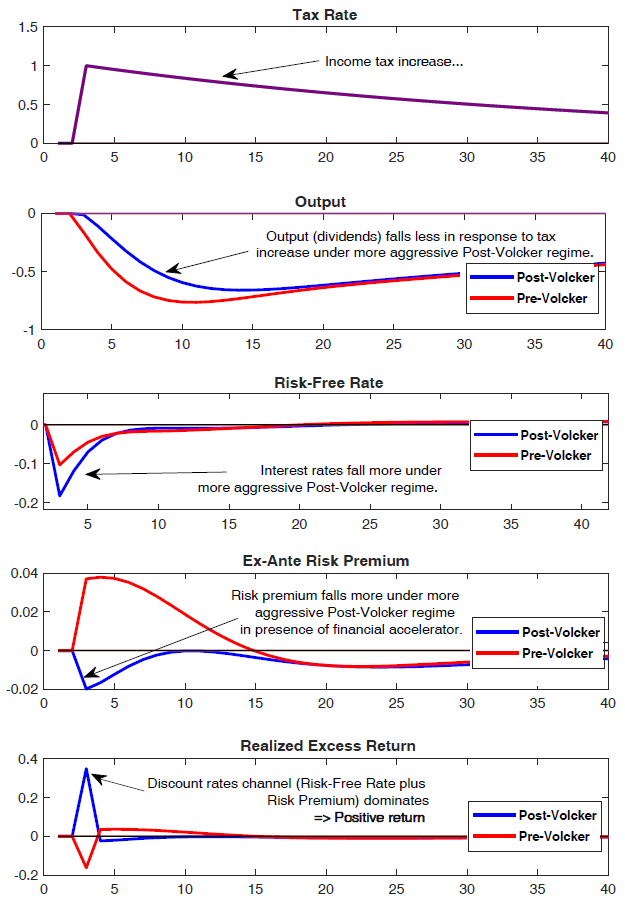 When It Rains It Pours: Cascading Uncertainty Shocks 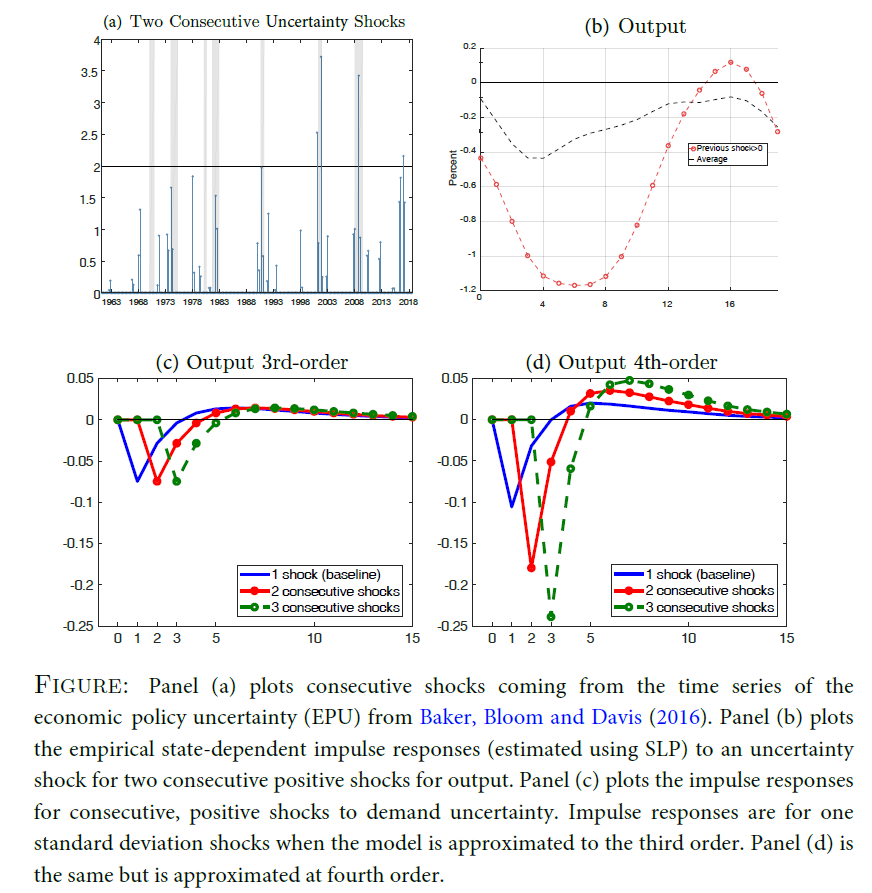 Abstract: Existing measures of risk premiums for near-term policy expectations typically suffer from issues of mean reversion, a reliance on surveys, and a lack of economic foundations. We address each of these concerns with a novel parsimonious macro-finance measure of risk premiums that is motivated by economic theory. We use rolling covariances between real and nominal activity in a regression framework, combined with model averaging, to uncover intuitive dynamics in the risk premium. When compared to surveys, market-based measures, and existing term structure estimates, we find that our measure provides superior out-of-sample forecast errors of the federal funds rate.

Abstract: Recently, multiple economists have banded together to suggest to the Federal Reserve that the inflation target needs to be changed. The inflation target is the core through which monetary policy makers rationalize their decisions while following the dual mandate of maximum employment and price stability. Understanding the rationale for its level, 2%, and understanding the academic literature related to optimal inflation dynamics seems more important than ever before. This survey takes into account every optimal monetary policy paper made available to the public since the mid-1990s and provides a careful discussion on the most important costs and benefits of inflation. 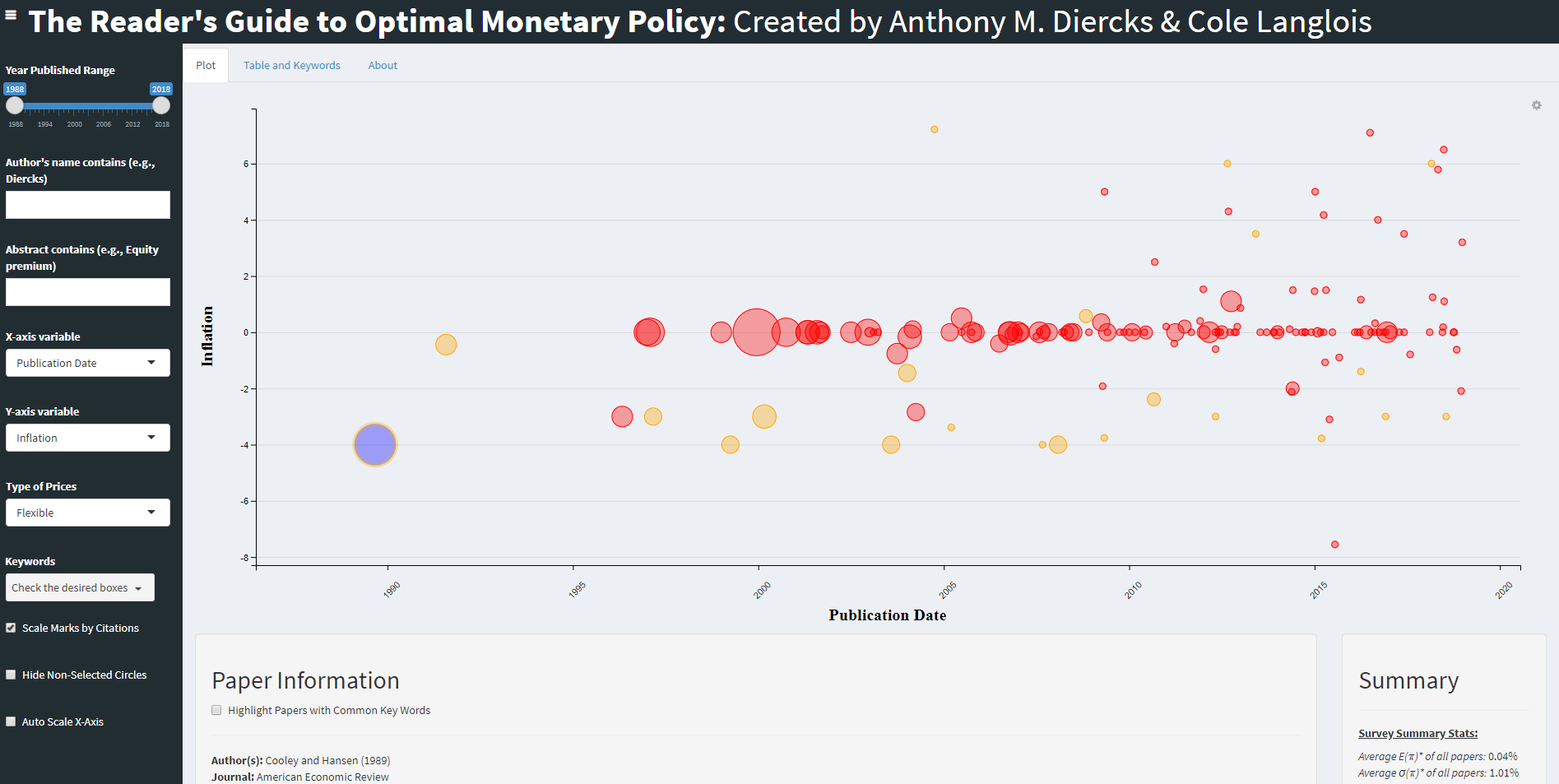 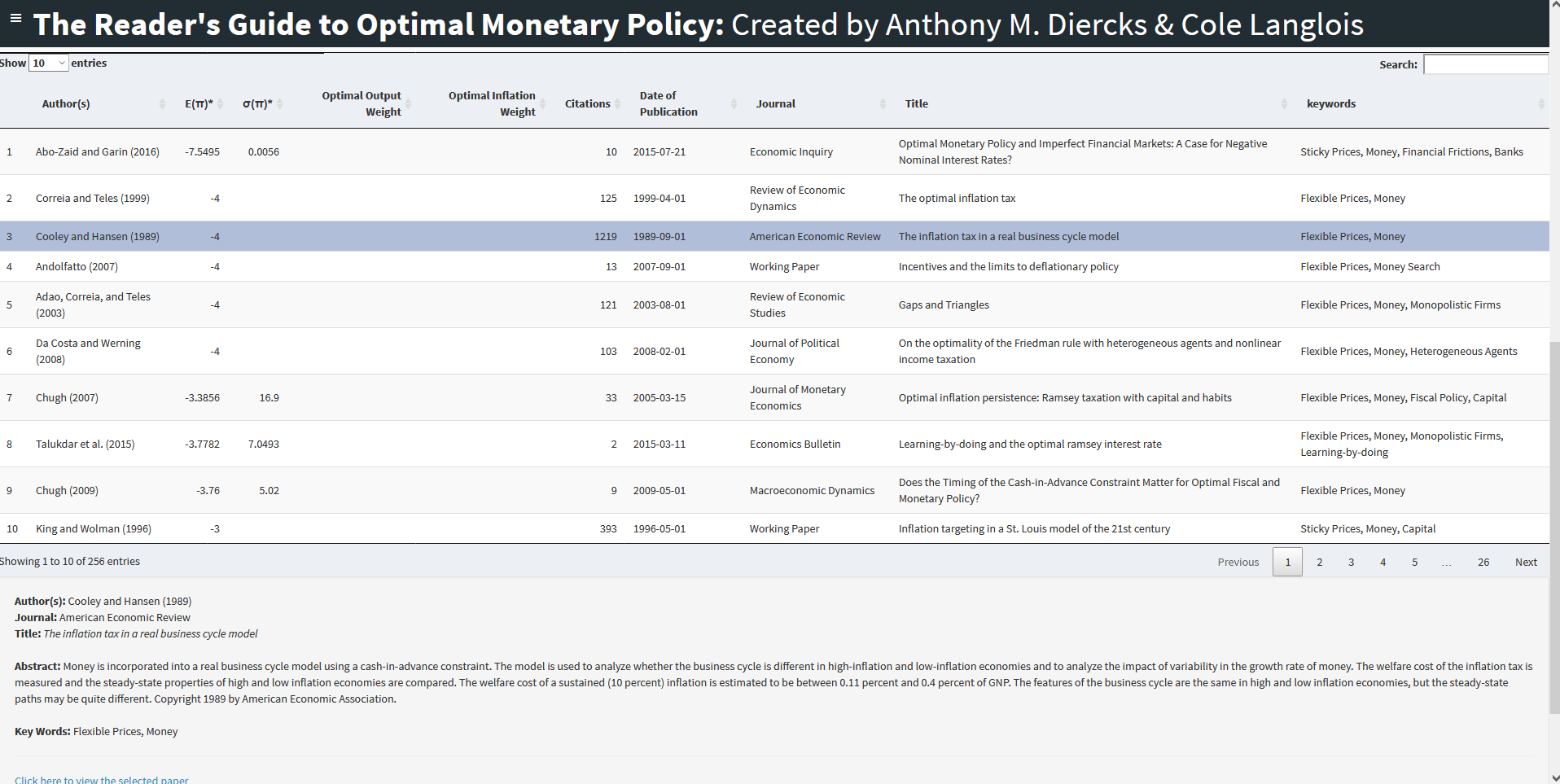